A Banarasi saree is a saree made in Varanasi, a city which is also called Benares or Banaras. The sarees are among the finest sarees in India and are known for their gold and silver brocade or zari, fine silk and opulent embroidery. The sarees are made of finely woven silk and are decorated with intricate design, and, because of these engravings, are relatively heavy.

Their special characteristics are Mughal inspired designs such as intricate intertwining floral and foliate motifs, kalga and bel, a string of upright leaves called jhallar at the outer, edge of border is a characteristic of these sarees. Other features are gold work, compact weaving, figures with small details, metallic visual effects, pallus, jal (a net like pattern), and mina work.

The sarees are often part of an Indian bride’s trousseau.

Depending on the intricacy of its designs and patterns, a saree can take from 15 days to a month and sometimes up to six months to complete. Banarasi sarees are mostly worn by Indian women on important occasions such as when attending a wedding and are expected to be complemented by the woman’s best jewelry.

Ralph Fitch (1583–91) describes Banaras as a thriving sector of the cotton textile industry. The earliest mention of the brocade and Zaritextiles of Banaras is found in the 19th century. With the migration of silk weavers from Gujarat during the famine of 1603, it is likely that silk brocade weaving started in Banaras in the seventeenth century and developed in excellence during the 18th and 19th century. During the Mughal period, around 14th century, weaving of brocades with intricate designs using gold and silver threads became the specialty of Banaras.

The traditional Banarasi saree is done with lot of hard work and skillful work using the silk. The saree making is a cottage industry for about 1.2 million people associated directly or indirectly with the hand loom silk industry of the region around Varanasi encompassing Gorakhpur, Chandauli, Bhadohi, Jaunpur and Azamgarh districts. 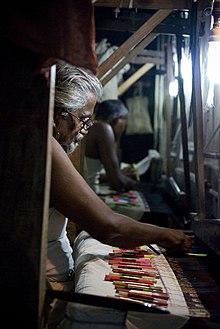 Over the years, the Banarasi silk handloom industry has been incurring huge losses because of competition from mechanised units producing the Baranasi silk sarees at a faster rate and at cheaper cost, another source of competition has been sarees made of cheaper synthetic alternatives to silk.

In 2009, after two years of wait, weaver associations in Uttar Pradesh, secured Geographical Indication (GI) rights for the ‘Banaras Brocades and Sarees’. GI is an intellectual property right, which identifies a good as originating in a certain region where a given quality, reputation or other characteristic of the product is essentially attributable to its geographical origin.

As per the GI certificate, Banarasi products fall under four classes (23–26), namely silk brocades, textile goods, silk saree, dress material and silk embroidery. Most importantly this means that no saree or brocade made outside the six identified districts of Uttar Pradesh, that is Varanasi, Mirzapur, Chandauli, Bhadohi, Jaunpur and Azamgarh districts, can be legally sold under the name of Banaras saree and brocade. Prior to this, in July 2007, nine organisations, Banaras Bunkar Samiti, Human Welfare Association (HWA), joint director industries (eastern zone), director of handlooms and textiles Uttar Pradesh Handloom Fabrics Marketing Cooperative Federation, Eastern UP Exporters Association (EUPEA), Banarasi Vastra Udyog Sangh, Banaras Hath Kargha Vikas Samiti and Adarsh Silk Bunkar Sahkari Samiti, had applied to the Chennai-based Geographical Indication Registry of Government of India, in a move that was supported by United Nations Conference on Trade and Development (UNCTAD).